It is foolish to pray to God to cure a disease, while we continue to violate some natural law that has caused it. We cannot ask Him to suspend temporarily all His laws on earth and, through an outstanding miracle, cure us of disease while we are indifferent regarding our duties and obligations.

Mere words without deeds on our part are not sufficient. We must have faith in the perfection, magnificence, and immutability of God’s laws and of God’s power.

The mystic knows well that God will never revoke, or even slightly modify, any one of the fundamental laws existing in the universe. Hence, he never asks God to set one of them aside. But the mystic may pray, will pray, and otherwise bring about a different form of manifestation of the Law consistent with the purpose and motive in back of the action of the Law.

The man, who discovered that whenever lightning struck the lightning rod on the roof of his house the water in his well was purified because the rod had a slight connection with the water pipes, produced ONLY a change in the MANIFESTATION of the fundamental law by putting the end of the lightning rod down into the well itself so that the whole well full of water would be clarified by the action of the lightning.

The fundamental Law was in the fact that the lightning would go to the ground, and there, spend itself harmlessly. But he directed the Law so that it would not only spend itself harmlessly, but constructively in purifying the water. Did he change a fundamental law? Or, did he direct the Law into a different manifestation by looking at the secondary principles involved, and DIRECTING THEM?

When man found that water dropping over a cliff had power to destroy things beneath its weight, he invented the water wheel so that the law in the action of dropping water would manifest differently—constructively—instead of destructively. No law was changed, but other laws were properly applied to the fundamental one.

This is the work which the mystic does. It is the work you must do in the attainment of mastership over the finite part of your existence.

Prayer is the lifting up of heart—emotional and unemotional—to the Creator in words. Words produce a rate of vibration—rhythm—measurable as it leaves the body.

Voice is a sound. The whole system vibrates creation: rhythm. The pulse of the body varies. We set it in motion, and it does the work.

If we raise enough feeling, confirmation and realization within ourselves, the prayer will get through the inner form—the spirit of the individual. Prayer should be creative, and then prayer is working through Law. The power is flowing through us and pictured or imagined. Jesus set a new pattern. 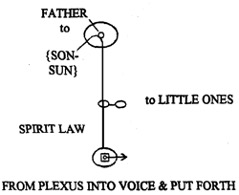 Pray just once. Don’t peek back over your shoulder at it. But you can re-affirm a prayer if needed.

Meditation is the vehicle or formula through which prayer works.

If not scientifically correct, the method is not spiritually correct.

If we want a thing bad enough, and voice it, the Law will open the door.