In the previous lesson we spoke of mind and what it is. Now we want to talk of function or use. I can hear my students asking, “What do you mean, use of mind? Here I’ve been working all this time to keep my mind quiet.” Well, this is one of the uses. For in this use of concentration, you are attempting not to use the lower mind, the objective mind, but rather the thoughts and impressions which the subconscious is in contact with, and even the Akasha.

Therefore, when we begin to have some degree of consciousness developed in us, we are establishing degrees of attunement with this Universal Mind and these Absolute Records — the Akasha. The use of your intuition, or the facility of its use, is just the first manifestation that such attunement is being established. It is not until we reach a degree of control that the voices of the cosmic, or that which comes through the subconscious, can whisper facts or knowledge through urges which arise within us when we are pondering and in doubt.

When we choose to use the brain and reasoning in any matter, the cosmic mind, through the subconscious, tries to set us aright. But we have gotten out of the habit of listening until reason gets the upper hand. Now let us put aside reasoning and listen to the still small voice until it again becomes automatic and of first importance to hear the Reality of Truth.

Certain things are not impressed upon the ordinary nerves or retina of the eye but upon extra-sensory nerves which are made to receive higher rates of vibration and by which impressions are carried to the subconscious instead of the objective mind.

In such cases the subconscious mind receiving the impressions stores away the pictures or idea and it remains there unknown to the objective mind until it comes across the border line of the objective mind and becomes known for a passing moment. We have a dual consciousness — either subjective or objective can communicate with it.

The purpose of concentration or meditation is to bring about a borderline condition as the balancing of the two arms of a scale. The student may look upon himself as being in an arena, around which are numerous doors or cells like monks’ cells, in each of which is the personality of the past.

As we gain inner consciousness and draw closer to the Akasha and as our subconscious rises, we sort of visit these alcoves, looking in some we may like and some we may not like, examining personalities and recognizing that each carries with it the particular personality you had in a previous lifetime. Some might be male, some female. And in accordance with these the level of cosmic consciousness is developed. Until we have acted upon our present life functionally, we depend on the past experiences which radiate on the soul because of the light through the Self. 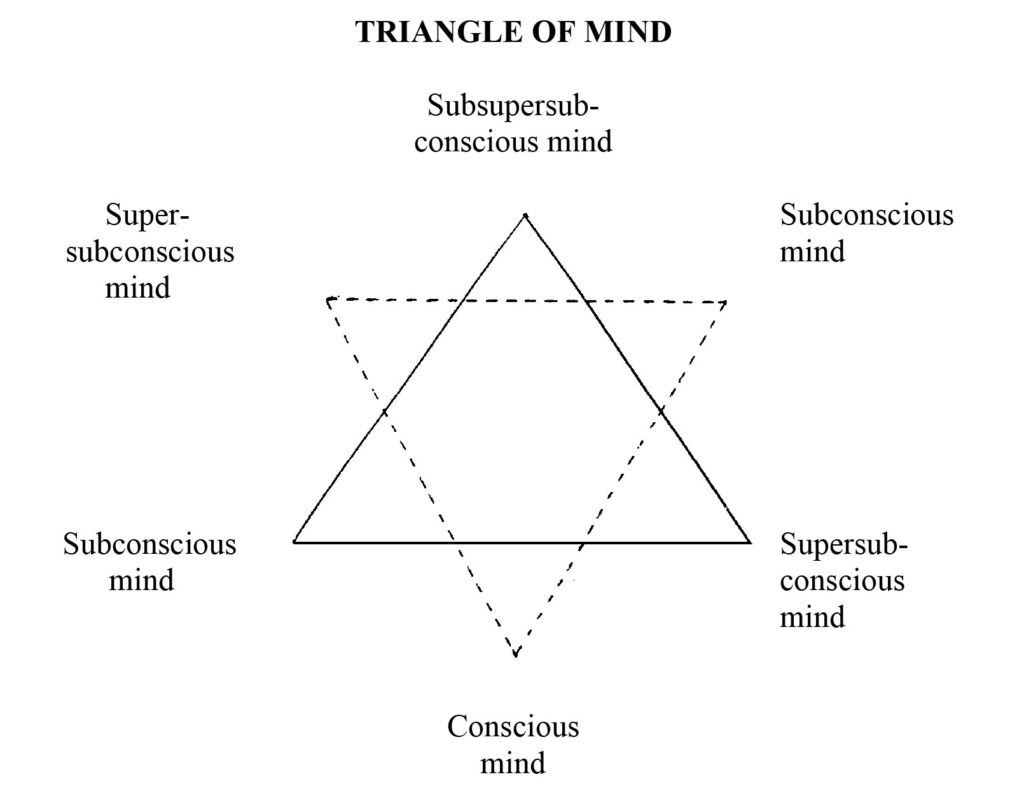 The table above depicts the maze and tangle of psychology, but added to it is an understanding of the fact that the inherent subconscious traits of the personality are often inherited from past incarnations. An outstanding trait from which we suffer deeply may be one which took many long years in previous lives to acquire so that it becomes deeply ingrained in us — a part of us.

We carry this totality in the Soul.

Sometimes, as one gains the ability to look into the records of his past, he might observe blank spots signifying absolutely no action at fairly regular intervals. This shows the periods of rest or intervals between cycles of material manifestation or incarnation on a material plane whether it be in the earth or any other planet.

In some ancient writings, the record of the past is symbolized as a rolled-up scroll, the entire memory of the individual. It oftentimes is said that he who becomes adept may read his history from the Akasha, be it pleasing or not. The subconscious is called subconscious because whatever it does occurs below the Level of conscious-awareness. In other words, it is not on the material plane.

A good exercise to provide an example of what I have just said is to trace back all the words and thoughts of the last half hour and then read them over carefully and see if you like them. If you don’t, strike them out, wipe them out and put a positive thought in their place. Thus the mind will harvest no unfavorable harvest in the future from the subconscious by receiving false or negative ideas. Let’s have no garden of weeds for you to harvest.

The mastery of mind is the great objective and first step of him who would follow the Christ and the Master Jesus. Once this is accomplished, we have become master of our destiny insofar as it is not under certain rational Karma or cosmic trend, for we will be radiating positive seeds amongst all those we come in contact with.

The subconscious mind is an absolute subordinate to the conscious mind and thus is reactive to reasoning. It is amenable to suggestion and can be controlled. It is a feminine gender in action, whereas the consciousness is masculine.

The mind originates and the subconscious creates; it makes clear good pictures in your mind and thinks positive thoughts. This must outweigh gossip, complaints and elaboration on the dirt someone did to you or the misery you have been feeling.

The subconscious mind does not know any better. It has been given the function of the ingredients given to it and does the job perfectly.

Whatever the ingredients given to it, it will give it back to you in outer circumstance. So get out your mental vacuum cleaner and give yourself a good mental housecleaning, ridding yourself of all negative thoughts, and turn your eyes toward God and towards Christ in the light of the Christos.

In Philippians 4: 6 we read, “In everything let your petitions be known to God in prayer and supplications with thanksgiving.” Instead of fault-finding, wait a minute and look for something to praise and give thanks for it. Look at it carefully — magnify it and soon you will see something to be joyous for.

Still more important is the thanksgiving of faith as Jesus, in multiplying the loaves, looked upward and gave thanks before the miracle had happened and became an event on earth. It had already been done in mind and perfect faith in knowing. So, likewise, giving thanks to the Father for hearing does not mean he will dwell on the lack of your faith, for that would multiply lack.

In John 6:11 we read of how Jesus fed the five thousand with five loaves of bread and two small fishes: “And Jesus took the loaves; and when he had given thanks, he distributed to the disciples, and the disciples to them that were set down; and likewise of the fishes as much as they would.” This is the only miracle reported in all four gospels. In the other gospels the word “blessed” is used in place of “thanks,” as used by John. These are some of the tools that we use to keep the mind scrubbed up so that the subconscious is not growing tares in the wheat crop which we have planted for the harvest.

He who lives in this day, if he is not going to resist the return of the Christ force and principle which is present in the new earth as it is developing, must keep a positive mind and a clean one. Unless the people of earth clean out the rubbish in their bodies and minds now, there will be too much for the human body to clean out as the New Earth is built.

Look around you and see the rubbish and waste in the world today, and it will tell you the rubbish that is in the mass mind today.

Let me remind you, again: Steady yourself so that you do not react to the negativity of the world or the acts of others. Thus we can go on in the future and not pass through transition now. As a new heaven and the New Earth are forming, do not hold any negation or sorrow within; do not water them with a few tears occasionally to wash out your emotions. You will be blessed as the positive things grow. This is one reason that you bless them that persecute you and return good for evil. Although some enemy is tossing weed seeds into the garden of your subconscious, they never hit the ground unless your own mind accepts them.

You must not accept what you do not want mentally. If you are living in difficult circumstances, you know they are not immaterial but that you must work all the harder to plant for the future by being Christlike today. There are other areas of the field that will come into fruition tomorrow through epigenesis and grace everyday.

IF YOU WISH TO SOW NEGATIVE SEEDS NOW, YOU WILL PAY LATER.

IF YOU WISH TO SOW POSITIVE SEEDS NOW, YOU WILL REAP
THE HARVEST OF USEFUL FRUIT.