The philosopher Thales, lived and worked during the time between c. 625 – 640 BC, and passed through transition c. 543 BC. He formed the earliest philosophies in Greece and founded the Ionian school.

Thales employed the first and greatest part of his time in travel. He went to Crete to inform himself of the mysteries of their religion. His last journey (being in years) was into Egypt to confer (as he acknowledged in his epistle to Pherecydes) “with priests and astronomers.”

He was in Egypt during the reign of Amasis by whom he was much favored and admired for many things, especially for measuring the height of the pyramids by their shadows.

He is the father of abstract geometry and was the first person to demonstrate that a circle is bisected by its diameter as shown below: 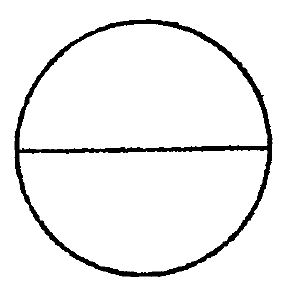 and that the angles at the base of an isosceles triangle are equal:

that two straight lines intersecting produce opposite and equal angles:

and that the angle of a semi-circle is a right angle:

When Molpagoras, an eminent person of Ionia, demanded what was the strangest sight Thales ever saw, he answered, “A tyrant old.”

Thales, being demanded what God is, answered “That which hath neither beginning nor end.”

Another asked if a man might do ill and conceal it from God: “How,” answered he, “when a man that thinks cannot.”

Thales said the most ancient of all things is God, for he is not begotten; the fairest is the world for it is his work. He said that the world is animated and that God is the soul diffused through each part, whose divine moving virtue penetrates through the element of water. He said that matter is fluid and variable, that motion is made by composition of the elements.

Being demanded what was difficult, he answered: “To know thyself.” And, what is sweet: “To follow one’s own will.” And, what is divine: “That which has neither beginning nor end.” He said, “It is hard, but good, to know ourselves, for that is to live according to nature.”

Hieronymus of Rhodes, in the second book of his scattered notes, relates that, in order to show how easy it was to grow rich, Thales, foreseeing that it would be a good season for olives, rented all the oil mills and thus amassed a fortune.

Thales is considered one of the seven wise men of the ancient world. He advised in political matters, and often his wise council saved the Ionic states from an invasion by Cyrus. Thales’ doctrines were preserved only by oral traditions. Aristotle finally wrote of his wisdom hundreds of years after his death. Thales considered water the element of all things and the earth floated upon it like a ship.