The Way, the Truth, and the Light is the Path to eternal peace. There is nothing in the pattern of Creation about Catholic, Protestant, or Judaism. All of these are creations of Man’s Ego, but are and have been used for the advancement of Man.

There is, however, in the Plan of Creation, a set of steps, they might be called—which Man must climb if he is not going to lift himself by his bootstraps.

These sets of steps are related to the set of tools which the Creator gave to Man so that he might attain Godhood.

Then, when we look really close at the Universal Picture to see what really is in this picture and what can be put to use, we find it is the most interesting thing, that the tools of Man—that is his actualities and the universal pattern of creation and Law—are closely related to the various religions.

The principle religions are: 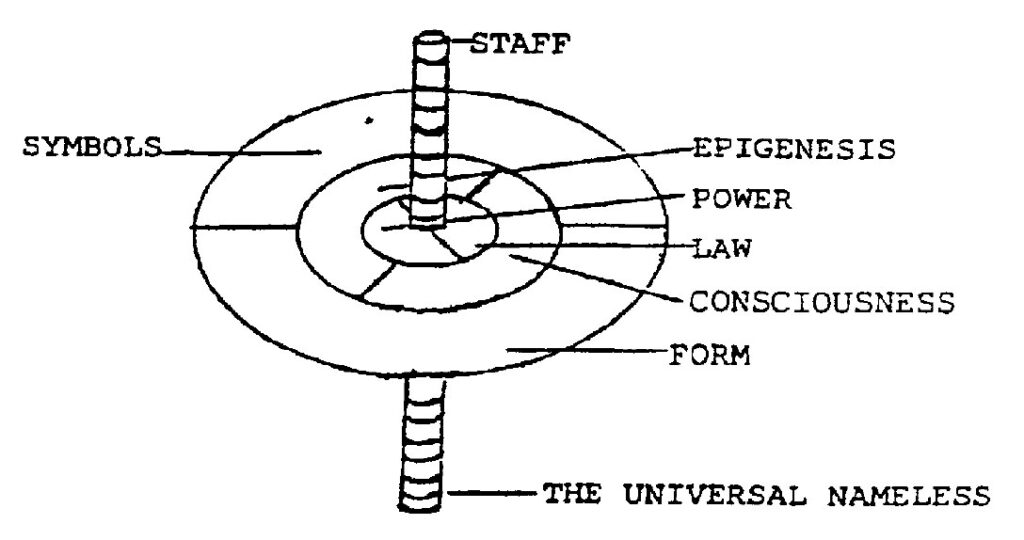 The above are the attributes of Creation. In this figure is the monogenetic expression of Universality.

In the figure are the secrets of all Creation. It is the dynamic force of God demonstrating its Power of progenity, in bilateral action.

This also illustrates the polarities which will produce action, growth and balance. It is the whole bag of tricks of Nature in action, from the primordial state to Godhood.

It illustrates all the chemical, mechanical, electrical and philosophical conjurisms in existence from the beginning to the end.

The simple magnificence of the All Mighty—SELF in SELF.

To the all-pervading intelligence of all creation.

Let us now go back and look at the tools of man as they are grouped together.

We have what might be called in the language of the past age, the invisible tools which are:

You can see that if these are assembled together, we have the Universal Tools of Man, our Level 2 classes in the Tree of Life:

By looking at the other diagram, we see that the staff and the Nameless One correspond. Two Attributes of the One Force are RA and MA. RA is the mind of God, which is positive. MA is the substance, or being of God, which is negative.

In the beginning, a Nameless Wanderer was Man (or Being), all perfect, all sufficient, because IT had all the tools working perfectly turned into the All wisdom of power.

Of a poise so balanced that it excluded all else because it was all. And none but its own SELF could comprehend ALL that IT was, in its personal universe, it was all, and it was ALL.

For it was unknown and unknowable. It was in poise and balance therefore, there was no resistance, no seeking—its comprehension was infinite.

IT had, and was, of a Great Splendor, Majesty, Magnificence and all Power—and if still, once we find the SELF, this is the Master Being.

To understand SELF is more than the MIND of Man can ever understand, but we may understand our divine obligation and relationship to all functioning, moving form and forces.

In all the splendor and Majesty and power, this is more than the Mind of Man can understand. Only SELF can conceive this.

Then, the Word took flesh and became the Man, the Christ-being, the God Man in all perfection, Magnificence and Power. Then, He understood himself and the Word was God, and at this realization, he was extremely humble.

Thus, the Word was God, God in Great Humility and Power, for when he conceived of Himself, it evolved through Law into a fleshly body of a little child. The child knew of his Father, but could not understand the Father, but this was not necessary. All He needed to know was Himself—or SELF.

For the Word was given to the Son, and the Son JESUS CHRIST gave it to Man again, Man had the Word, but was not conscious of it.

Thus, the involution of Man began, and thus, the mystery of Genesis is unfolded.

There, then we gradually forgot one aspect of our nature through working on one of the other aspects of force, which was made prominent in our consciousness due to the influence of the Electromagnetic fields of other planets and in relation to the place in this solar system in which that particular birth was, and did, take place.

There also did we forget the Original Creator, or the Father, of all Creators.

Slowly, but surely, of what He created and recreated Himself, all the time these Suns were being created, these beings and the memory of the original creator became more and more vague.

Because of the change of consciousness from the original Creator, this caused a breakdown of oneness with it and the created forms became less and less infused with the effluent LIFE and certain parts of the Beings became less active and therefore, internal formations became apparent.

There also began to build a lone-formness because the crystallization of the spirit became the denser matter. There was a longing to draw closer to the source of life, a change of potential, an electrical potential, and from this developed prayer, eventually.

With the difference of density came the action of what we call knowledge and sensation, for as this creation sensed a difference in reaction of the spirit in its own universe, IT, realized a revelation of knowledge.

This he transferred to his New Son and here at this time the transfer was at a time before the expulsion of the New Son took place into the space around it.